Top 4 activities you can’t miss on your trip to Vulcano Island, Sicily

Vulcano (Sicily) is the southernmost island in the Aeolian archipelago. Separated from Lipari by a narrow stretch of sea, it is an authentic natural jewel of rare beauty with its lush vegetation, fumaroles, bubbling hot springs and sulphur vapours on Levante Beach. The volcano dominates the landscape, standing guard over the island. 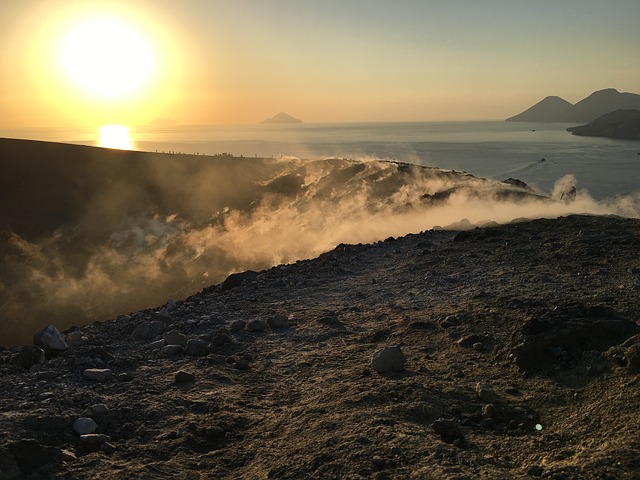 Vulcano (Sicily) is a magical island where you can enjoy activities in the heart of unspoiled nature: from snorkelling to diving to discover the rich and vibrant seabed, to excursions and trekking paths, like the renowned “Ascent of the Gran Cratere”.

When you arrive in Vulcano (Sicily), you are suddenly greeted by the acrid smell of sulphur but don’t worry, you’ll immediately get used to it!

The first thing to do is go to the crater, where a really amazing view is waiting for you. From here you can get a complete view of the island and of the other 6 sisters! And if the sky is clear you will be able to see the Tyrrhenian coast of Messina very well.

The route may initially look difficult, but with a little patience and slowly, slowly you will reach the top of the volcano without getting too tired. With the help of the guides, you can walk around the rim of the crater and across the Piano delle Fumarole, wearing masks and handkerchiefs to limit the intense smell of sulphur.

Spectacular scales of alum, sulphur, and melted metals are scattered around the top of the crater, reaching temperatures of up to 400°C! It’s better to avoid the hottest hours and don’t forget to put on the proper footwear and take a good amount of water and a pair of trekking poles if you can.

You will enjoy the wonder at the top! Vulcano dominates the island, watches over it as an old guardian, the heir of a mythological fashion given it by the Greek and the Roman who, for its presence, called the island “terra calda” (Terasia). 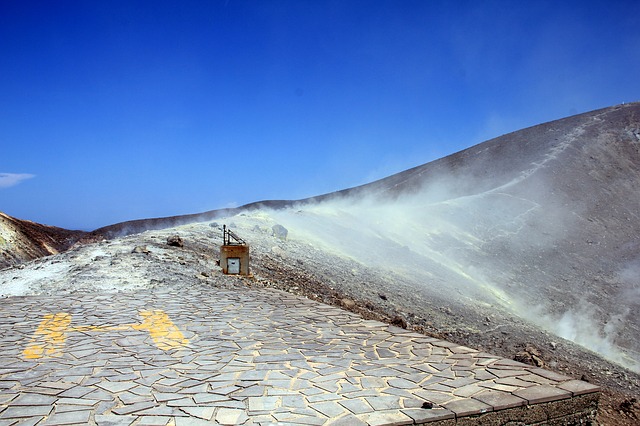 One of the unmissable things to do on Vulcano (Sicily) is swimming in its famous “acque calde” (warm waters). Tens of submarine volcanic fumaroles eject hot steam, giving the water the effect of a natural Jacuzzi.

If you aren’t a fan of the cold waters of the Mediterranean, this transparent stretch of sea will be the perfect spot for a swim!

It is impossible to resist the call of the sea, especially on a visit to Vulcano island . At a depth of 25 meters, by Capo Testa Grossa and the cliff of Quaglietto lies the statue of the Virgin, surrounded by red cherry shrimp.

Snorkel at the cliff of Sirenetta, where a vertical wall gently slopes from 16 to a depth of 40 meters. Here, the sulphur springs colour the sand, roiling the surrounding water.

A few more meters down big scorpionfish, pencil worms, sponges, and pentagon starfish emerge from the rocks, while groups of anthias and damselfish follow divers all around.

Vulcano (Sicily) is also known for its thermal mud. Not far from the little harbour are a variety of natural mud baths that bubble up from deep within the earth. People take the baths not just to get a variety of benefits for the skin, but the entire body, from helping fight bone and respiratory weakness to simply relax in the warm mud. 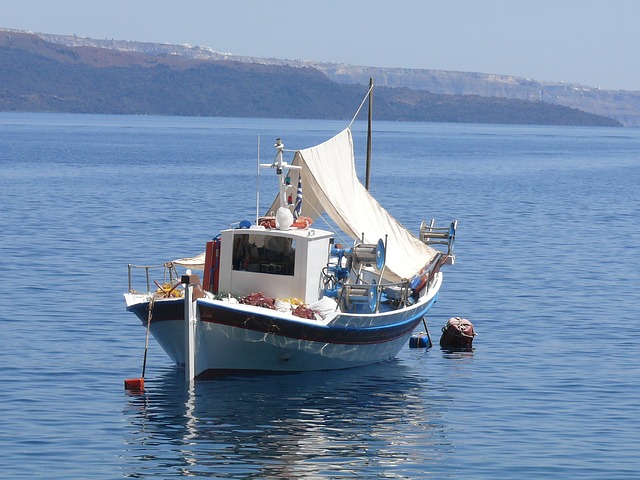 A curiosity: In ancient times Vulcano was known as Therasia (meaning hot), then Hierà (meaning sacred) in honour of Hephaestus, the God of Fire, who had a workshop there. The Romans’ name for Hephaestus was Vulcan, and they renamed the island Vulcano.

For centuries, this marvellous territory was shaken by violent eruptions that evoked fear and respect in ancient populations. The soil on the island was rich in sulphur and alum, which became its most precious natural resources.

A big volcanic eruption between 1880 and 1890 destroyed the island and left it largely unpopulated until people began to repopulate the whole archipelago in the years between the two world wars.

The Lipari Vulcano ferry route connects the islands. Currently there is just the 1 ferry company operating this ferry service, Liberty Lines Fast Ferries. The crossing operates up to 17 times each day with sailing durations from around 10 minutes.

Vulcano Hotels – Where to Stay 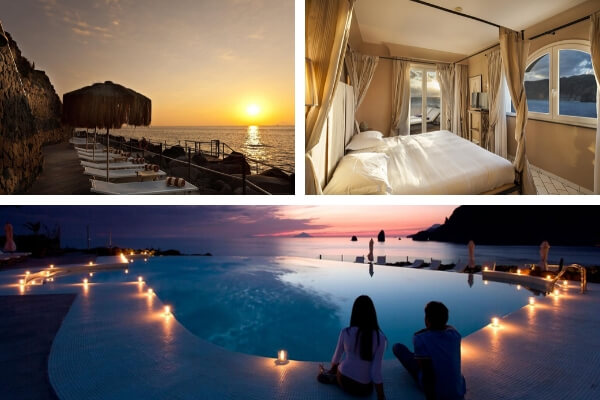 An exclusive hiding place of soft and Mediterranean lines blending in the gentle Aeolian atmosphere of the characteristic pulere, cannizi, and arches oriented toward the sea. The interiors of the elegant and romantic Therasia Resort evoke the island’s wild nature, thanks to a sophisticated use of local materials like lava stone, cotto tiles, cedar and olive wood. Therasia Resort Sea & Spa offers a real journey into Mediterranean culinary traditions, the perfect contamination of Sicilian flavours and creativity, local aromas and culture. 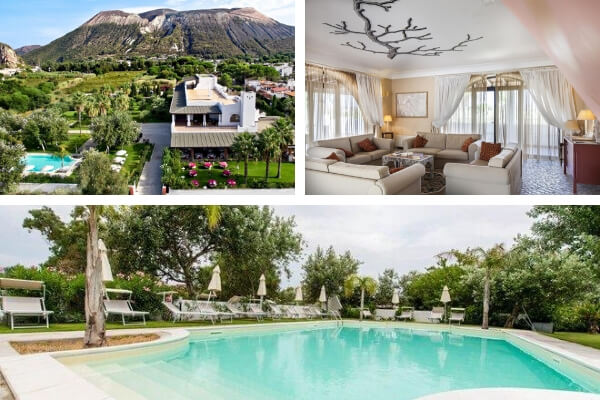 A wonderful place for a relaxing holiday

The Garden is just 100 m from the volcanic sands of Ponente Beach on Vulcano Island. This renovated 1970s building with garden boasts a traditional Aeolian style.The island’s impressive crater is a 15-minute walk from the Garden, which is located 100 m from the geothermal pools in the Porto di Ponente area. The centre of Vulcano is 350 m away. 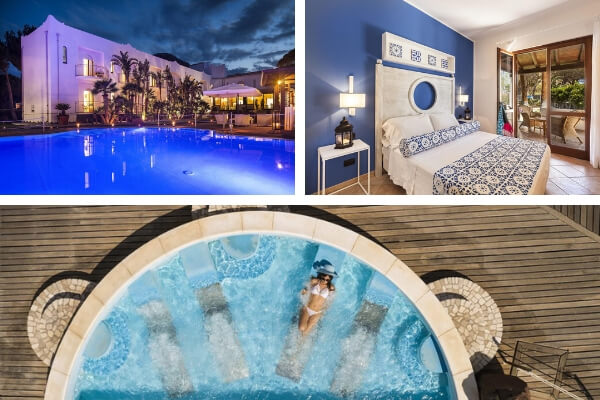 Located in a small pine wood, the hotel is 350 m from Isola di Vulcano’s main bay and 1 km from the thermal spa. The scheduled hotel shuttle takes guests to and from the port, 1.5 km away. Breakfast at Orsa Maggiore is Italian style and features local organic products and freshly squeezed Sicilian orange juice. The restaurant serves specialities from the Aeolian Islands including freshly caught fish.Surrounded by lush gardens, Hotel Orsa Maggiore is just 400 m from the famous Sabbie Nere black sands and 1 km from the town centre.