Lying like so many partially submerged giant whales just a few miles off the coast of Trapani (west Sicily), the Egadi Islands offers a great deal of charm and irresistible, crystalline waters. 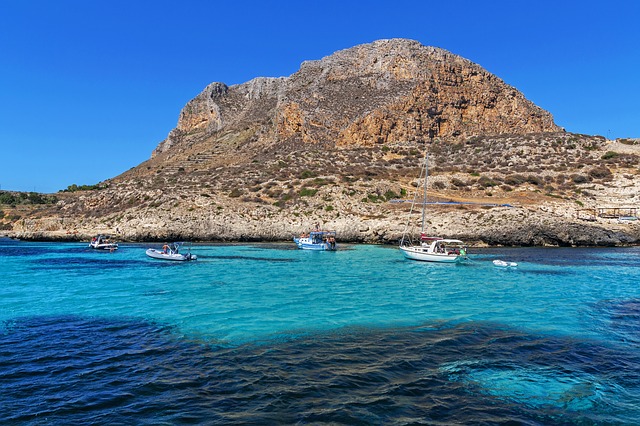 Favignana, the largest of the Egadi islands, is a wonderful Mediterranean island rich in smells, colours and traditions. A journey to Favignana allows you to combine sun,sea,relaxation and history. All the appeal of Sicily is concentrated in the space of a few kilometres!

Favignana’s 33km perimeter is a puzzle of alluring coves with sparkling, multi-toned water. It’s also the flattest of the Egadi, and nearly all its coastline is accessible by land. The island is often described as having a “butterfly” shape: Favignana town is located on a narrow isthmus connecting the two “wings”, which have quite different characteristics.

The eastern half of the island is largely flat with the best beaches, while the western half is dominated by a chain of hills, of which Monte Santa Caterina is the tallest at 314 metres (1,030 feet).

You can cross the island very easily by bicycle, as it is quite flat and largely made of tuff rock, a relatively soft rock traditionally used for construction (There is an extensive network of bike trails but you can also easily ride on the roads. Normal bike rental rates are €5 a day).

Here our selection of the Top 5 things to do in Favignana, Egadi Islands

Enjoy the most beautiful beaches of Favignana
Favignana is situated in the largest protected marine area in Europe where large prairies of poseidon, as a large submerged tropical forest, provide a valuable habitat for the reproduction of many species of fish, a great variety of resident and migratory birds, extraordinary cetaceans, Caretta Caretta sea turtles and less sporadically the rare Monk Seal. So..let’s discover the best beaches in Favignana! 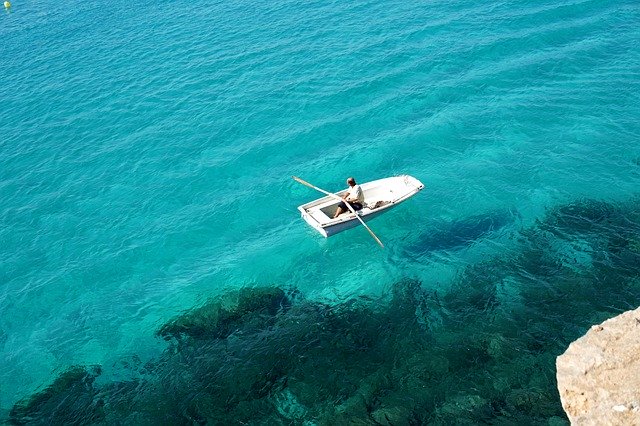 Cala Rossa: You cannot miss this bay with its extraordinary colours, unique scents and greenery. The great peculiarity is to be surrounded by an area rich in clay pits: a bath in this cove, able to immerse the visitor in a unique natural setting, such as an offshore pool, not to be missed.
Bue Marino: close to Cala Rossa, you will see the best colours of the sea! The sea changes its colour from deep blue to light blue, almost white: it’s a wonderful view! You can also see opposite to you the city of Marsala on the Sicilian coast.
Cala Azzurra: A Natural swimming pool with fine sand. Take your snorkelling mask and enjoy it!

Lido Burrone and surroundings: it suits for the families with babies. Access is very easy and the water is blue and not too deep.
Cala Rotonda: About 5 km from Favignana centre. It’s a wide bay where the sea is always calm. The beach has small pebbles, beautiful seabed full of fish and beautiful cove.
If you love to be on the water you can charter a boat and either self-drive or go on a day trip. Boats are available by the hour or the day.

Visit the tuna factory of Favignana

The Florio tuna factory was built in 1859 and it remains today a symbol for Favignana. The tuna fishery in fact, was more than an activity; it represented the only form of livelihood for the majority of islanders. The rite of the fish slaughter happened with systems of integrated nets, to form channels for directing the flow of the tuna migration which were in search of an ideal habitat for breeding, around May.

Today the factory welcomes dozens of visitors on a daily basis, with guided tours to the discovery of the building itself, of the fishing technique and history and of the tuna processing process. The museum also houses the archaeological collection of the Aegadian islands: here have been gathered the remains of Carthaginian and Roman ships sunk in the Battle of Levanzo on March 10, 241 BC.

Head to Santa Caterina Mount – for a stunning view! 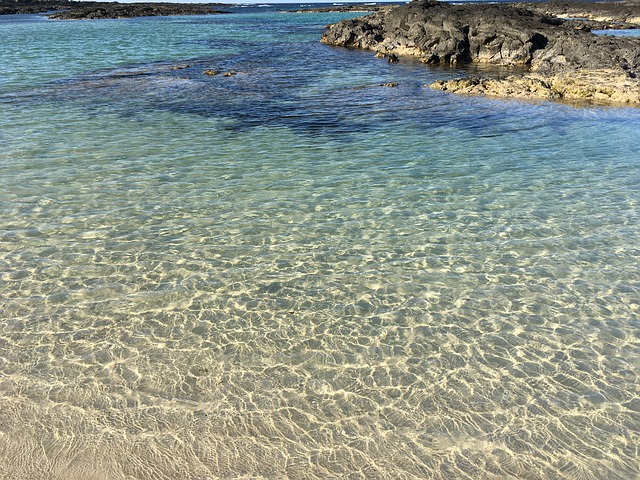 The best walking excursion from Favignana town – and the most obvious – is up to the castle dominating the island’s hill. The route is straightforward – past the beach and out along a straight road from town, then zigzagging up a paved stepped path. It is quite a climb, but nevertheless a popular outing in the late afternoon, once the heat of the day has passed.

The castle, called the Forte di Santa Caterina, is officially closed to the public. Dating from Norman times, and extended under the Spanish in the seventeenth century, the fortress is in a breathtaking location. The views from up here, on the ridge separating the island’s two halves, are worth the walk!

Favignana town is a cheerful place, with a real local atmosphere and a friendly attitude to the tourists who arrive. The centre of town is pedestrianised for the evening passeggiata. In the main squares, Piazza Madrice and Piazza Europa, old men sit outside cafes and children play on their bicycles while their parents do the shopping or stop for a chat. In the evening, a good range of food shops opens their doors, from fishmongers to souvenir food shops for tourists selling all kinds of local specialities (frequently tuna).

Our tip: After a day of sun and sea you just have to join the Italian cuisine: the kitchen of Favignana is superb! You should not miss the tuna, the product of the island, served in every way imaginable.

Also desserts are excellent, here the ricotta (soft cheese) is a speciality, stuffed into Sicilian cannoli or the small cassate. One of the best places to buy a good, cheap meal on the go is a little bakery uphill from Piazza Madrice which sells small take-away pizzas for bargain prices, as well as the ubiquitous Sicilian pastries.

Spend a magic night in hotel built in a Tuff quarry 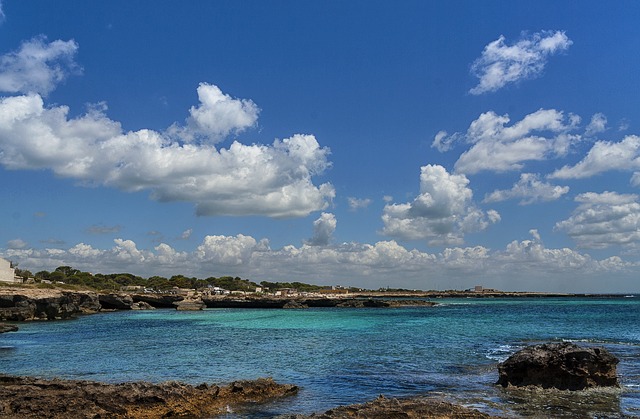 For decades, the man managed to extract from the heart of Favignana, a truly extraordinary stone: the Calcarenite. Today, the singular geometry of the columns and galleries looks like grand cathedrals, carved by the skilled hands of the masters in the extraction of tuff: the pirriaturi. Several abandoned quarries are used for the cultivation of fruit trees, forming the underground gardens, another feature of the island.
In some tuff quarries it is possible to find charming tourist accommodation.

Here the best ones:

Cave Bianche Hotel 4*
An eco-design hotel located in the largest calcarenite quarry in Favignana and in the heart of the island of Favignana. The hotel is centrally located as concerns the most appealing beaches of the island (Cala Rossa, Cala Azzurra and Lido Burrone), about three km from the night life of the inhabited centre and from the port, which connects the island with the Sicilian coast.

Delle Cave Hotel 3*
Hotel delle Cave is a valid choice for a relaxing holiday, thanks to the large garden that opens out inside the charming former quarry. The building was completely renovated in 2006 using mainly natural and ecological materials such as: local stone, travertine and wood.Delle Cave Hotel is also located near one of the most beautiful beaches of the island of Favignana, Cala Rossa, and about 300 metres from the beach of Scalo Cavallo, easily reachable on foot.

Our tip: Avoid Favignana in August, when the heat, tourist masses, and high prices diminish the island’s magic. Do, however, come in late May or June, when the weather is divine, the flowers are blooming, and you’re likely to catch some of the fervour that accompanies the mattanza season.

How to get to Favignana, Egadi Islands:

The hydrofoil is the best way to get to Favignana. Siremar and Ustica Lines run several hydrofoils crossing daily to Favignana, Levanzo and to Marettimo. Departures are from Trapani and Marsala. The ticket can be purchased online or in a harbour office.

The nearest airports are Birgi in Trapani or Falcone Borsellino in Palermo. Here there are taxis and buses; you can take them to reach Trapani and its port. We suggest, whenever possible, to land in Trapani as this is the nearest airport, just 30 minutes away from the town port. The journey from Palermo to Trapani port takes around 2 hours.

Once in Favignana, if you don’t fancy cycling or walking, it is possible to hire other vehicles such as scooters, open-top buggies and cars at rental offices by the port. The island also has a bus service, with three routes which enable you to reach most parts of Favignana, though the buses don’t run often and you’ll need to fit around their timetables.

Favignana Hotels – Where to Stay 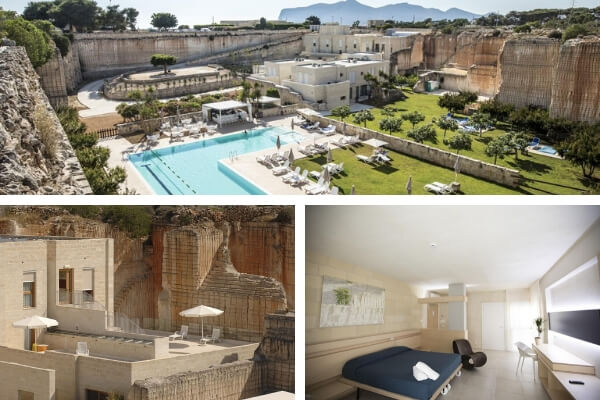 Very unusual and original hotel inserted in an old quarry

An eco-design hotel located in the largest calcarenite quarry in Favignana and in the heart of the island of Favignana. The hotel is centrally located as concerns the most appealing beaches of the island (Cala Rossa, Cala Azzurra and Lido Burrone), about three km from the night life of the inhabited centre and from the port, which connects the island with the Sicilian coast. 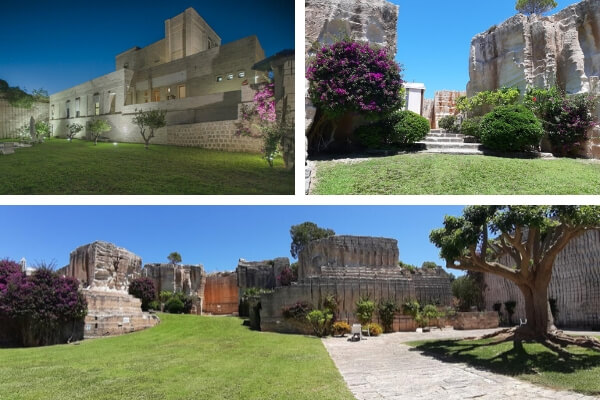 Amazing little hotel set in an old mine

Hotel delle Cave is a valid choice for a relaxing holiday, thanks to the large garden that opens out inside the charming former quarry. The building was completely renovated in 2006 using mainly natural and ecological materials such as: local stone, travertine and wood.Delle Cave Hotel is also located near one of the most beautiful beaches of the island of Favignana, Cala Rossa, and about 300 metres from the beach of Scalo Cavallo, easily reachable on foot. 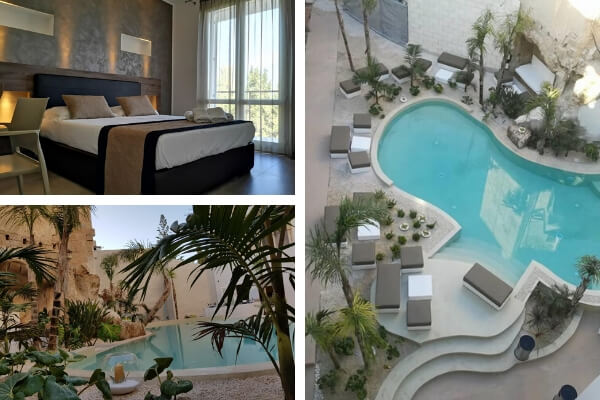 Featuring a swimming pool, hot tub, restaurant and snack bar, Resort Il Mulino is located on the beautiful Favignana Island. it is just 650 m from the beach and a 10-minute walk from Favignana Ferry Port. The air-conditioned rooms and apartments at Il Mulino come with simple décor and tiled floors. Each has a minibar, TV and a bathroom with a hairdryer and free toiletries.