Palermo Tour: What you must See in the City

Palermo is a city of contrasts, it is a city where palm trees are ubiquitous, the food and wine are both delicious and affordable, the history is compelling, and the architecture is beautiful. Are you ready to take an unforgettable journey through an engaging Palermo tour? 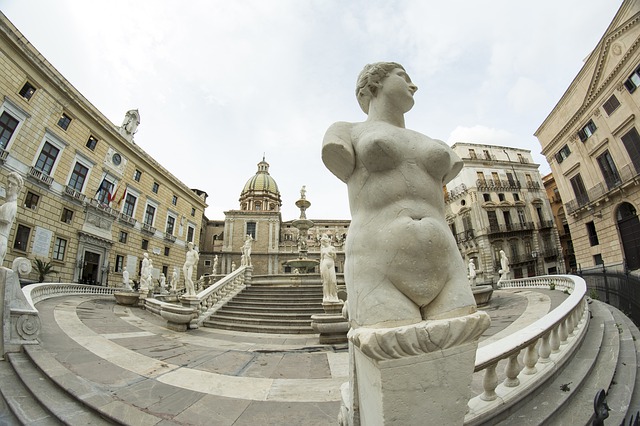 A walk through the crowded streets of the city will result in the discoveries of everything from elegant Georgian apartments, to Norman castles, old domes of Arab mosques, major Neoclassical theatres and endless other curiosities in a city which has been a multi-ethnic melting pot for centuries.

Let yourself be surprised by its streets, its life and the charm of its nature. During your Palermo tour, you might like to start from the symbol of the city: the Cathedral.

The Palermo Cathedral is iconic, its facade has been changed and shaped by the renovations of each of the cities foreign governers which makes it a unique blend of architectural styles. A wonderful mixture of Norman, Moorish, Gothic, Baroque and Neoclassical characteristics the church is set in the heart of the centre of the city, and its artwork and decor inside are one of a kind.

It’s also home to some very unique touches, like a sundial on the floor marked with zodiac signs and an inscription from the Quran on one of the columns near the entrance-both highly unusual for a Catholic church! It’s unique outdoor rooftop terraces offer a great perspective of the historic centre of the Palermo, and recently the Cathedral has also been opening up for night time viewings, an experience which sounds absolutely beautiful.

Then you can continue your Palermo tour by seeing Palazzo dei Normanni, was once known as the Royal Palace. Currently, is it where the Sicilian Regional Assembly gathers, but it used to be the home to influential kings throughout Palermo’s history. 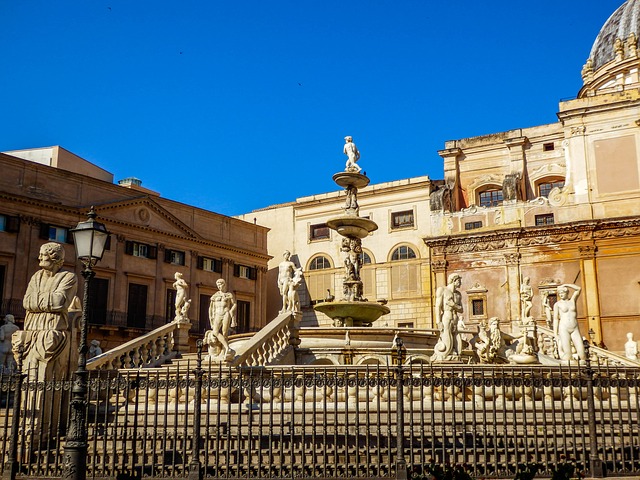 This is one of the most visited spots in all of Sicily. It is the oldest royal house in all of Europe as well, and was once the seat of many Sicilian kings and imperial leaders such as Frederick II and Conrad IV. On the first floor of the Palace, you will find the Palantine Chapel.

Its infinite beauty will leave you breathless. It is ornately adorned every possible way it can be with impressive mosaics.
The most noteworthy of these represent the Christ Pantocrator blessing. While the Arabs might be credited with building the Palace (or Qasr to them), the Normans would be the driving force in what made it into what it is today.

Continuing your Palermo tour to the historic centre, you could not miss the intersection of Quattro Canti, one of the most well-known points of the city.
It is located at the crossroads of La Corso Vittorio Emanuele Avenue with La Via Maqueda, which divides the four quadrants of the four neighbourhoods (La Kalsa, Vucciria, Capo, and Albergheria). This intersection consists of a square surrounded by a circle of historic buildings, forming a unique perspective.

Its build was inspired by the Quattro Fontane of Rome in the 17th century. It emphasizes the effect of the sun illuminating different facades with the passage of time, resembling a solar clock. For this reason, it was also named “sun theatre”.

Piazza Pretoria is located next to Quattro Canti down Vía Maqueda. In our opinion, this is the most beautiful square and fountain in Palermo, surrounded by Palaces with the imposing Fontana Pretoria in the centre. The fountain is covered with statues of nymphs, newts and gods. 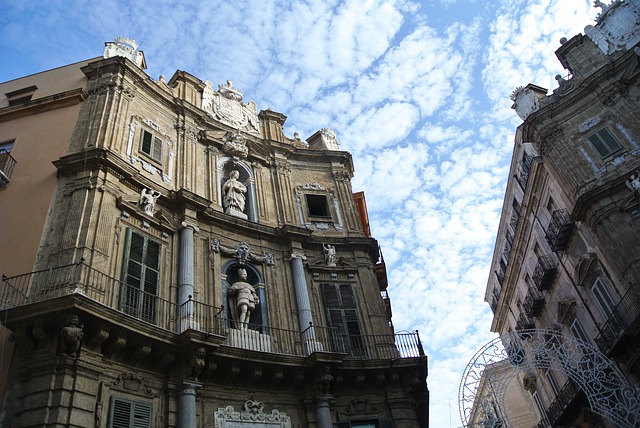 Unlike the rest of the city, everything here is made of marble, lights and splendour. For a moment it transports you to the famous squares and fountains of Rome!

At the top of Via Maqueda, you cannot miss Teatro Massimo Vittorio Emanuele, the third largest opera house in Europe, after Paris and Vienna. For those who are fans of Italian opera, the great tenor Enrico Caruso began his career in this theatre. Also, Teatro Massimo was used as a setting in famous movies like The Godfather.

Visiting the Teatro Massimo is absolutely a must, during your Palermo tour. You might take up a new passion for opera, or simply enjoy climbing the same staircase as the great boss Corleone did with his family!

To finish your day in Palermo, we recommend visiting the oldest port in the city, Cala di Palermo, located in the La Kalsa the neighbourhood. You can end your visit to Palermo by taking a peaceful walk here.

Our advice is to accompany your walk along this port with one of the marvels of Sicily, the thousand flavours and types of “granites” (crushed ice), ideal for cooling off from the powerful Sicilian heat.

An unmissable part of your Palermo tour will be surely Monreale with its extraordinary Cathedral. Monreale is slightly out of Palermo, and you will need a half day to go there and come back. If you don’t want to travel by car, you can use the 389 bus, which can be taken from Piazza Indipendenza. The price of a ticket is €1.40. 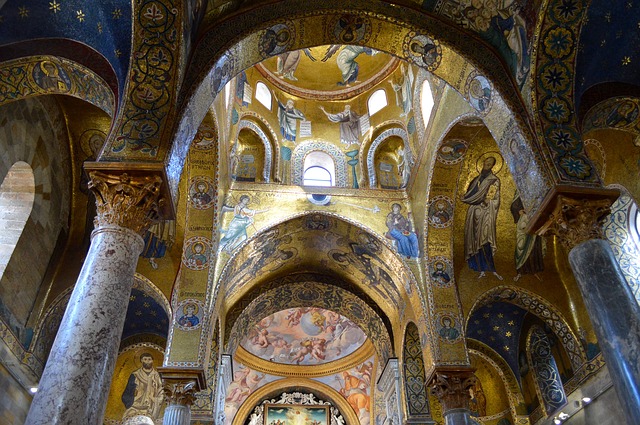 The church of Monreale is a UNESCO World Heritage Site because of the wonderfully preserved architecture of the church and surrounding cloisters.

It’s when you will get inside that you will really be amazed! It’s covered with more than 6,500 square metres of gilded mosaics, depicting scenes from the New and Old Testament.

The magnificent golden mosaics which dominate the Monreale church depict a giant Christ, who looks over a succession of Saints, scenes from the old and new testament, royal thrones and King William himself being crowned by Christ. Stunning!

Palermo Hotels – Where to Stay 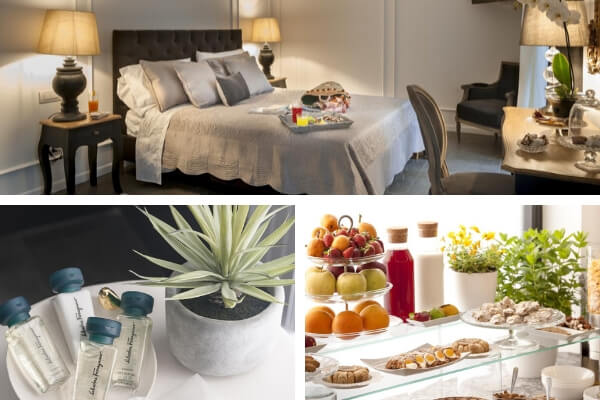 Stay in the heart of Palermo

Located in Palermo’s centre, Palazzo Natoli is a modern and refined boutique hotel. With its 9 rooms, the building presents an intimate and elegant environment, maintaining the noble residence’s identity. It is located a few steps from the Palermo Cathedral and the famous Quattro Canti, the crossroads from which to start visiting the city’s historic centre and markets. 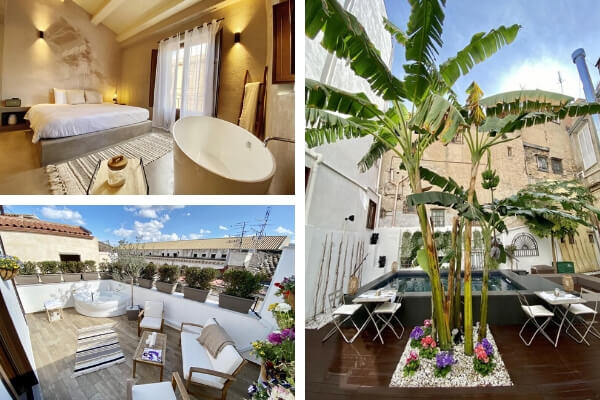 For a real authentic experience in Palermo

Casa Nostra Boutique Hotel features a restaurant, outdoor swimming pool, a fitness centre and bar in Palermo. 500 m from Palermo Cathedral and 1.3 km from Fontana Pretoria, the property features a shared lounge and a garden. All units are equipped with air conditioning, a flat-screen TV with satellite channels, a fridge, a kettle, a hairdryer and a desk. 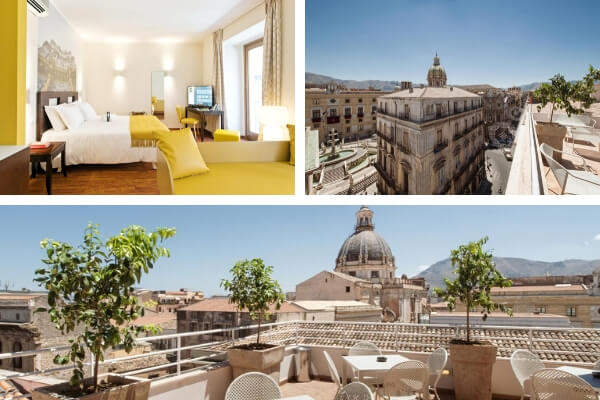 You could not find a better location in the heart of the historic centre of Palermo. B&B Hotel Palermo Quattro Canti is set next to the piazza of Quattro Canti.Enjoy a beautiful view of the fountain in Piazza Pretoria from the rooftop terrace. Each guest room is complete with Smart satellite TV with Chromecast device, air conditioning, and internet connection.