How to spend One Day in Catania

Are you ready to take an unforgettable journey through an engaging Sicily tour? Catania is the perfect mix between old culture and young city life, its historical centre is pure baroque splendour and the food culture is irresistible. Its fortunate geographical position in one of the most beautiful places of the Mediterranean sea and its warm sun determines its healthy mild climate and trigger the friendliness of its inhabitants. 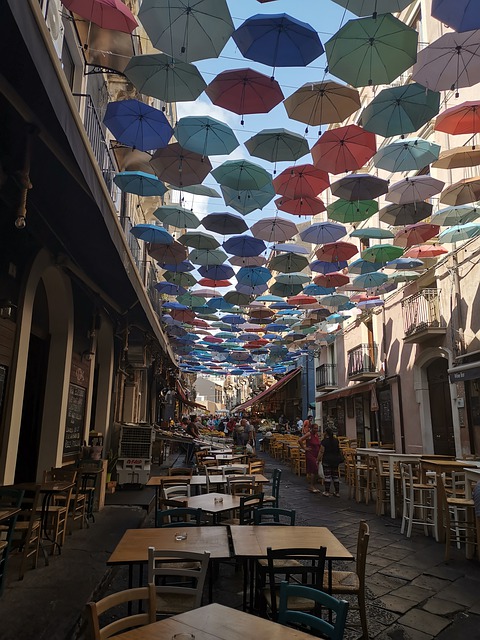 In the 17th century a devastating volcanic eruption and an earthquake covered and destroyed Catania but then the entire old town centre was rebuilt in a “grey” Baroque style, unique in the world because of the building material used: lava! A stroll through its historical city centre is in itself an extraordinary journey.

You’ll see the Elephant’s Palace, the municipal halls, and the facade of the Cathedral in Piazza Duomo, and in the middle of the piazza, the symbol of the city: a smiling lava elephant fountain (called Liotru) carrying an Egyptian obelisk. The obelisk is believed to possess magical powers that help calm Mt Etna’s restless activity.

It bears an enigmatic inscription, MSSHDEPL, which, according to some is an acronym for “The mind of St. Agata is sane and spontaneous, honouring God and liberating the city”.

Not far away, there’s the stunning Via Crociferi. If you love the Baroque, with its sumptuousness and many and rich decorations, the street is a real open-air museum. At just 200 meters, there is a succession of religious buildings with sumptuous facades, a strong sense of scenic setting, so much so that film directors have even shot some scenes of their films here. An example? Franco Zeffirelli’s Sparrow.

Continuing your stroll, you will discover that Rome isn’t the only city that has an amphitheatre! Tucked between many (inhabited) houses you can find this archaeological monument.

Once you have bought tickets, you’ll be amazed by the size of this theatre, built entirely in lava stone, it could accommodate up to 7,000 spectators. The stair seats are almost all intact, and the underground crypts can also be partially visited.

If you love shopping, during your Sicily tour, don’t miss the main street: Via Etnea. Along this street you’ll find hundreds of shops and trendy restaurants, but the highlight is perhaps the most beautiful view you get over Mount Etna.

If you are nightlife lover, in the evening, the streets of the historic centre, from Piazza Teatro Massimo to the University Square and stretching to Piazza Santo Spirito, are invaded by thousands of young people who flock to the many bars and pubs in the centre to indulge in the opportunity to have a drink and listen to some music. 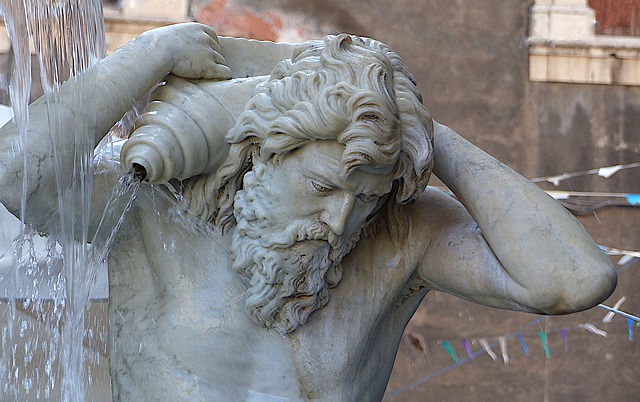 During the summer, the beach clubs of the coast masquerade as discos under the stars, creating amazing evenings a few steps from the sea!

If you find yourselves in the city centre and you need some information during your Sicily tour, there are a number of information points close to Piazza Duomo and on Via Garibaldi, but don’t worry because any local will be happy to help you!

Top things to do in Taormina in a day

Being one of the most known tourist destinations in whole Sicily, Taormina still represents today one of the poshest places in the region since it became an integral part of the “Grand Tour” of European aristocrats and artists some two hundred years ago. 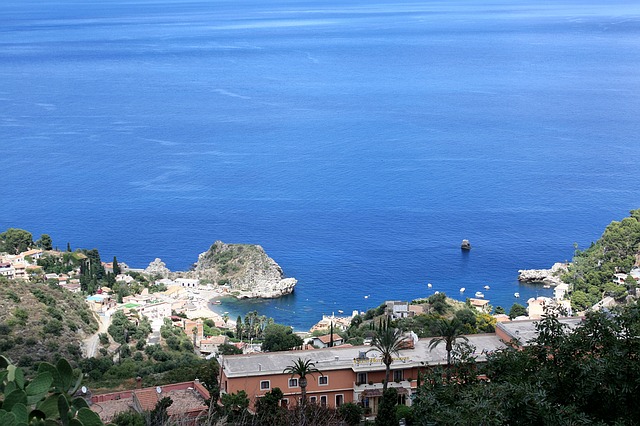 Taormina (50 km far away from Catania) is perched on a rock 200 metres above the sea from
where people can admire both the gorgeous panoramas and the landscape: from Calabria to the Mount Etna, the tallest active volcano in Europe.

During your Sicily tour, in Taormina you will find one of the world’s greatest views, winding streets, alleyways and staircases strewn with bars, and restaurants, art galleries, ceramics, souvenir shops, small squares around corners, beautifully restored medieval buildings… a perfect place to enjoy a romantic stroll!

This way you will discover that this city cares about every small detail. The streets are perfectly decorated with colourful ceramics. The main street, Corso Umberto, runs in no more than 15 minutes. This street is crossed by Porta Catania and Porta Messina; doors that belonged to the old city wall. Arriving at Porta Messina you will find the main tourist attraction of Taormina, the Teatro Antico di Taormina.

The Greco-Roman amphitheatre of Taormina started its life in the third century BC. It hosted then performances of works by Euripides, Aristophanes, Aeschylus and Sophocles. It was originally a small theatre, enlarged by the Romans. Beyond the columns you can see the bay of Giardini-Naxos, the coastline, the town’s rooftops and, in the distance, Mount Etna. 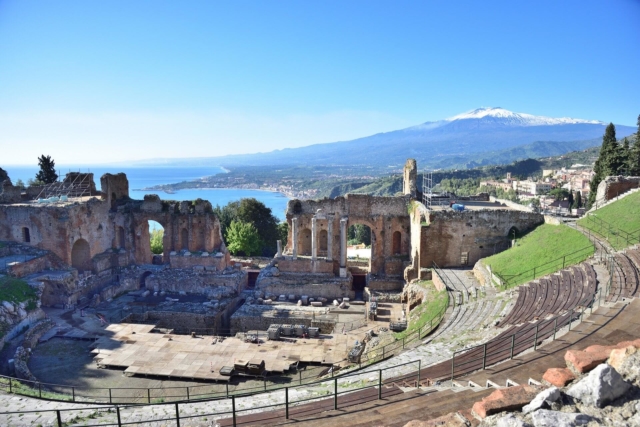 The theatre’s acoustics are still exceptional – a whisper on the stage can be heard in the last row. Nowadays the theatre is used to play concerts of classical and modern music as well as to celebrate the film festival. The entrance fee is € 10 and the opening hours are between 9:00 and 19:00 and despite the touristic nature of the place, your visit is undoubtedly a must-do in Taormina in one day.

The closest beaches are as well a wonderful natural scenario: steep rocks and beaches, lidos, restaurants, and some very luxury hotels making this enchanting coastline a firm favourite with Sicilians and visitors alike. When arriving at Porta Messina you can visit the next most visited tourist attractions of Taormina: Isola Bella, a small island that communicates to the coast when the tide is low. Don’t miss it during your Sicily tour!

This island hides a luxurious residence with swimming pool where several remarkable people lived throughout history.
A cable-car connects Taormina with the seaside at Mazzarò, for visits to the beach and Isola Bella. (Adult one-way: € 3.00/every 15 minutes)

Want to spend a great night at the beach? Lidos and beach clubs in Taormina-Mare, Letojanni and Giardini-Naxos organize events and parties with cool tunes and sublime cocktails 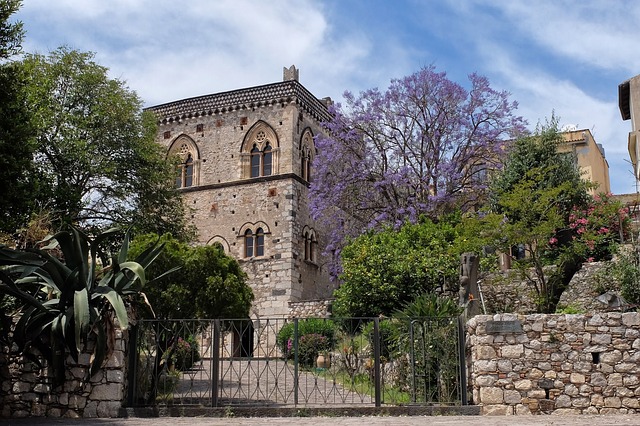 Especially in spring, when the almond trees are blossoming, we recommend a walk from Taormina to Castelmola, which takes about an hour. Good hikers continue from Castelmola up to Monte Venere, about 900 m above sea level. Don’t forget a water bottle and your hat! The climb is worth it – you will be awarded with panoramic views of the Peloritani Mountains, the Med, the Italian mainland and Mount Etna!

If you are planning to drive to Taormina, check the parking provision when you are choosing accommodation, and ask your hotel for directions; the central lanes are partly pedestrianised. There are large fee-charging car parks outside the town centre, including the Parking Garage Lumbi, with a bus connection to the centre. Another option would be to park the car near the beach and from there take the funicular or the bus that takes you to Taormina.

Catania and Taormina Hotels – Where to Stay 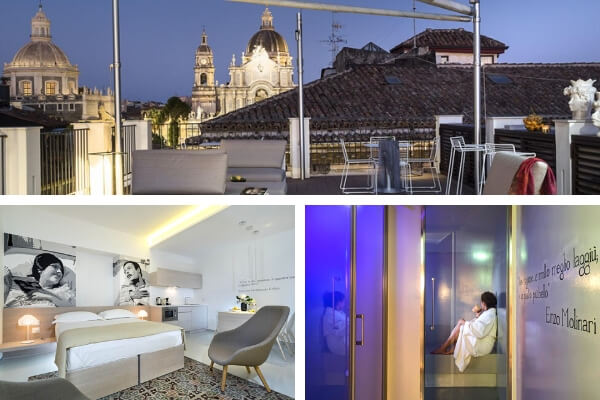 A unique design hotel in the centre of Catania

Duomo Suites & SPA is located in Catania, in the old town, and is surrounded by Baroque churches, sites and private buildings.The hotel is a four-story historic building that dates back to the early 18th century and it still retains its charm despite renovations. The hotel’s comfortable and intimate look features design furnishings, and each room and common area is characterized by an exclusive elegance. 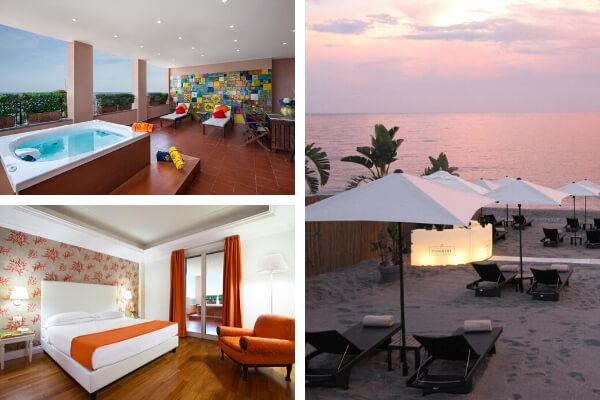 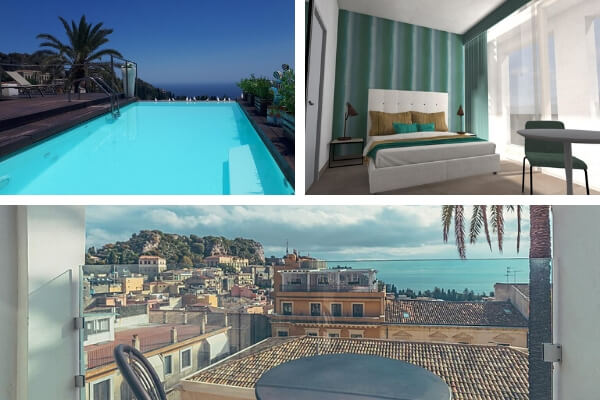 One of the most picturesque neighbourhoods in Taormina

Il Piccolo Giardino offers town and mountain views from its small rooftop terrace and pool. This hotel with a garden is in the pedestrian zone of Taormina’s historical centre, near shops, restaurants and the Greek Amphitheatre.The bus station and cable car are 200 m from Il Piccolo Giardino GH ***Superior.