Best towns to visit in Puglia: Lecce, Italy’s Florence of the South

If you are looking for something different, and wish to experience a less well-known part of Italy, Lecce is an amazing place to visit and it is considered one of the best towns to visit in Puglia.
Lecce has been called the ‘Florence of the baroque’, more than 40 churches and at least as many noble palazzi were built or renovated here between the middle of the 17th century and the end of the 18th to create one of the most unique landscapes in Italy. 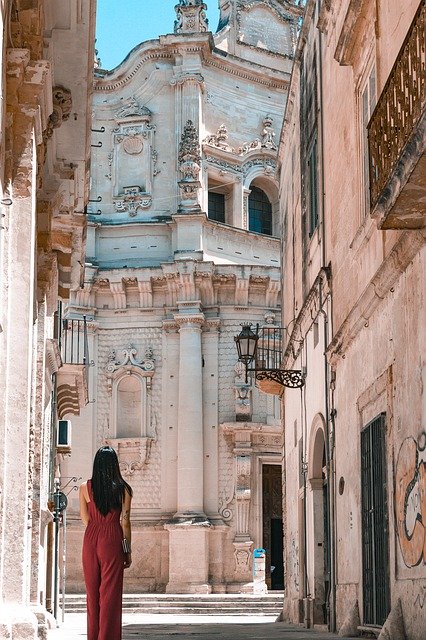 You’ll adore the narrow streets lined with buildings and homes made from the region’s honey-coloured limestone..It is a relaxed place; the locals sit outside bars such as Pasticceria Alvino in piazza Sant’Oronzo, sipping iced coffee with almond syrup ,or they window-shop along corso Vittorio Emanuele.

Lecce has an extensive history and has been inhabited since the times of Emperor Hadrian and the Roman Empire. As you explore, you’ll inevitably stumble upon Lecce’s history and opulent architecture. The city, is one of the best towns to visit in Puglia and it is full of masterpieces of Roman, Medieval and Renaissance age, but above all, Lecce is a Baroque city.

Here the baroque is expressed in a unique way. Everywhere you walk in the city, you can look up to see delicate figures-angels, human faces, animals, plants, and fanciful curlicues-supporting balconies, surrounding doorways and windows, and decorating the capitals of columns.

In the city center you can admire beautiful examples of the stonework in monumental churches, balconies and terraces. At the heart of the historic city is the Piazza Duomo, a beautiful square surrounded by some of Lecce’s most important buildings.

The 17th century Bishop’s Palace is a beautiful building whose facade includes arches, stone balconies, statues and carvings. Next to it, the Duomo (cathedral) was built by Giuseppe Zimbalo. It has two main entrances, a restrained, elegant entrance on the north side and a magnificent Baroque entrance from the square.

Lecce’s other main sight is the Santa Croce church. This was built over several centuries. It is the most decorated of all the highly decorated Baroque buildings of Lecce and its facade includes animals, monsters, vegetables and a large rose window.

Nearby is the Piazza Sant’ Oronzo, a square with an unusual mix of styles: a Roman Amphitheatre sits on one corner of the square and is used for open-air concerts in the summer.
Where else can you get an iced espresso with almond milk, Lecce’s speciality coffee drink, while looking out of ancient Roman history?

The most beautiful thing about Lecce is the pleasure of walking through its centre, stopping at the bars, and always meeting lots of people in the street (apart from during the hottest hours of the day in summer). Lecce still abides by the time-old tradition of the afternoon siesta.

Shops and restaurants close between the hours of 2:00pm and 5:00pm, leaving the city centre eerily quiet. However, in the early evening, everything re-opens and locals emerge back onto the streets. The evening stroll commences around 6:00pm. Groups of friends and multi-generational families venture together into the winding lanes of Old Town Lecce for a leisurely walk before dinner. 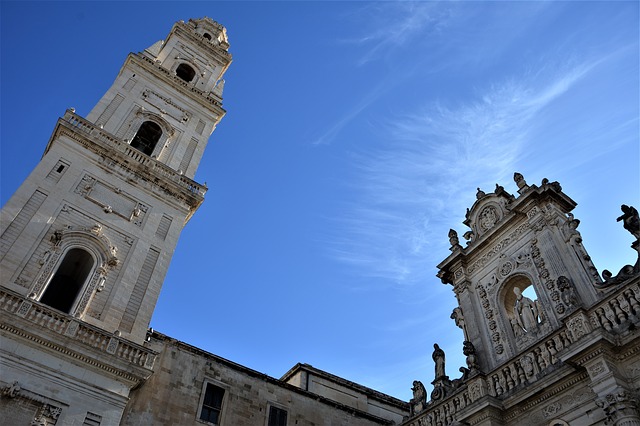 Lecce shopping takes place in the evening, too. Businesses re-open their doors for the evening crowds. Boutique shops, art galleries and the corner market all have evening hours for shopping in Lecce, Italy.

Via Vittorio Emanuele is the main street lined with shops and cafes that runs between Piazza del Duomo and Piazza Sant’Oronzo. Look out for the workshops producing and selling cartapesta. For more than 200 years Lecce has been famous for these handcrafted papers-mâché figures, which were originally commissioned by the church.

Today you can find souvenir masks and models of both saints and sinners in the numerous, small artisan shops in between the architectural marvels of the old city. And there’s a Cartapesta museum to visit, if you’ve got time to learn more about the craft.

Did you know? A few kilometres south of Lecce is Grecia Salentina, a group of towns with nice historic centres where a Greek dialect is still used.

Lecce Travel Tips: Things to know before you go!

The best time to visit Puglia

The best time to visit Puglia is during the spring, early summer and autumn. High summer, July and August, is hot, reaching the 38°Cs inland, and it’s busy, too, with inflated prices to match demand. May, June and September are lovely, with temperatures in the 26°Cs, and good for walking and cycling.

Lecce Hotels – Where to Stay 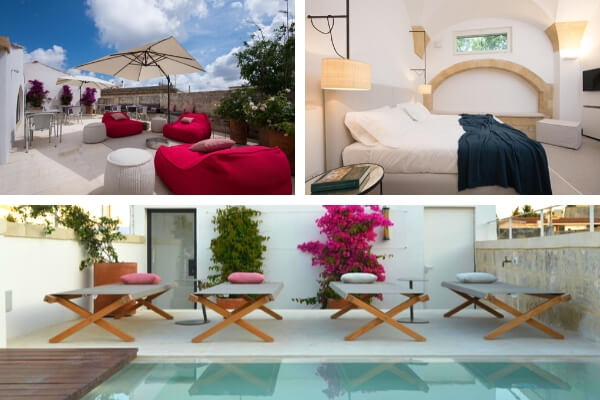 Palazzo De Noha is a unique fusion of historical legacy and contemporary design.
A visionary renovation transformed the fifteenth-century palazzo in an inspiring couture hotel that celebrates artisanal tradition and global innovation. Every room is unique: exquisite artworks, museum-grade pieces of Italian and international design and their very own shade of marble fixtures. 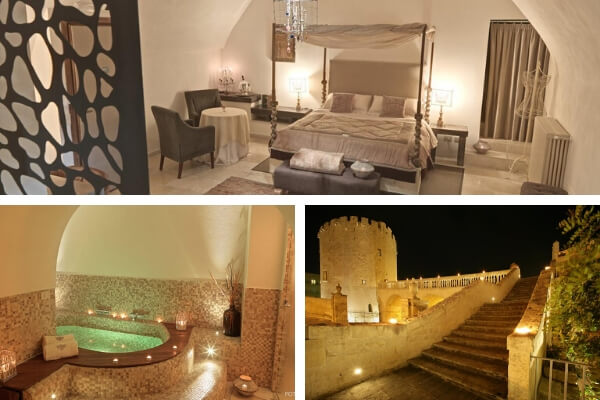 Staying in a Historic House

Torre del Parco is a medieval fortress dated back in the 15th century and located in the heart of Lecce, just a few steps away from the historic city centre and a few kilometres away from the most beautiful beaches of the Salento coast. The luxury rooms, finely furnished with antiques and equipped with all the modern comforts, have direct access to the Wellness Area where you can enjoy a regenerating massage from our qualified staff. 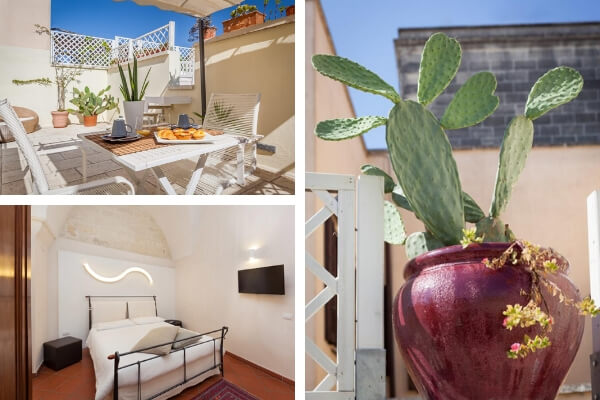