Polignano a mare, a town of Greek origins, is considered one of the most beautiful hidden gems of Southern Italy and definitely should not be missed during your Puglia tour. 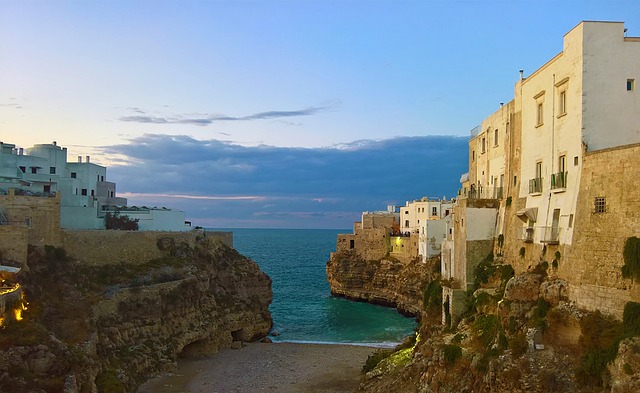 Polignano stands out on the blue of the sea from a stunning and breathtaking cliff, with its old town still protected by the ancient walls. The Marquis Arch is the ancient main door to the old town, through which you arrive in Piazza Vittorio Emanuele II, centre of the religious and political power.

The Palace of the Watch houses the statue of San Vito, local Saint Patron and every day it is still hand winded by a lady!
In the historic centre, the style of houses, balconies, alleys is very diverse: Arabian, Spanish, Byzantine, Norman.

The village, the many views of the sea, the white corners full of plants are all utterly charming. Get “lost” making your way through the small paths and walkways. You won’t get lost anyway, they all eventually lead to one of three gorgeous sea viewing terraces.

In the main piazza of Polignano a Mare, you will see the town’s most important church, the Chiesa Matrice. Located on the site of an old Pagan temple, this church elegantly combines Gothic and Baroque features.

Another unique feature is the poems written on the steps and walls by “Guido, il Flaneur”. Flaneur is a word invented by Baudelaire to define a man who wanders around a place to live and experience it.

Guido moved to Polignano after falling in love with this place and decided to adorn its corners with poems. It’s a lovely, peculiar thing and you will make wonderful photos!

During your Puglia tour, make a quick stop at the Borbonic Bridge where passers-by get to see the famous and beloved Domenico Modugno Statue.

This statue is popular in Polignano for the iconic Italian singer-songwriter, he is known for singing the song, Volare, and has been dubbed as “Mr. Volare” all over Italy and the world. Pose by this iconic landmark and post it on your Instagram feed to remember your trip to Polignano a Mare.

Polignano a Mare is also famous for its stunning coastline. Taking a walk along the sea is an absolute must when on a visit to Polignano a Mare; there are many sea promenades both to the north and south of the historic centre.

While walking towards the northern part, you will cross a bridge, you will arrive at Lama Monachile, the town’s most popular beach.

Easily accessible from the city centre, here you will be able to enjoy the clear water of the Adriatic as well as see the ancient Roman Bridge. Once part of the Via Traiana, an old Roman road constructed in 109 AD by Emperor Trajan, the bridge formed part of an extension of the route from Benevento to Brindisi and was named after a nearby monastery; the name of the bridge literally translates to ‘monastic monk’.

For art lovers, during your Puglia tour, don’t miss another stunning abbey. The fishermen village of San Vito, three kilometres away from Polignano, houses the majestic Abbey of San Vito. According to the legend, in 801 a boat with the princess Florenza landed in this harbour with the relics of the Saint, which were then preserved by the local monastic community.

From the 14th to the 18th century, the Abbey was the place of residence of Frati Minori conventuali dei SS. Apostoli and then in 1785, it became part of the Royal Property.

It’s an impressive sight to behold the moment you step up to the church and you will no doubt be captivated by its intricate designs, as well as the many gorgeous sights you will see, upon entering this bastion of religion. 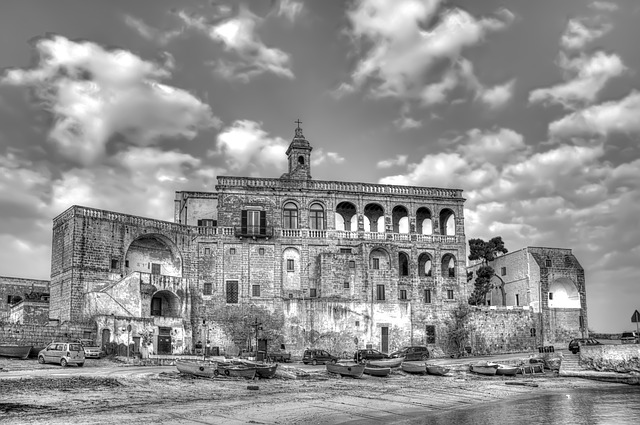 Polignano A Mare Hotels – Where to Stay 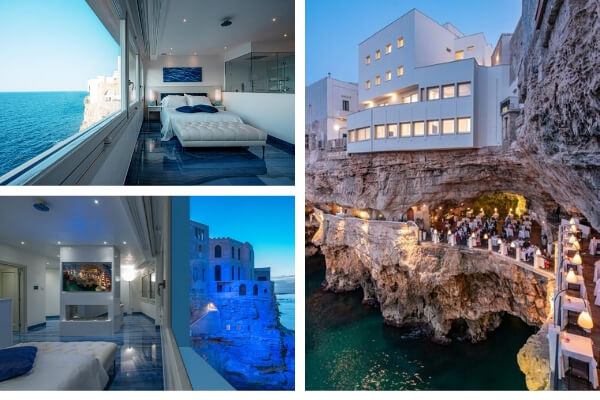 World-class luxury in a magical and enchanted place

Located in the historical centre of Polignano a Mare, the Grotta Palazzese Hotel, situated on a scenic cliff overlooking the sea, rests on the famous Grotta Palazzese, a cave that hosts the homonymous restaurant considered among the 10 most exclusive outdoor restaurants in the world.
Renovated with elegant refinement, it has 15 rooms hanging over the sea in a complete harmony with the most advanced technological systems. 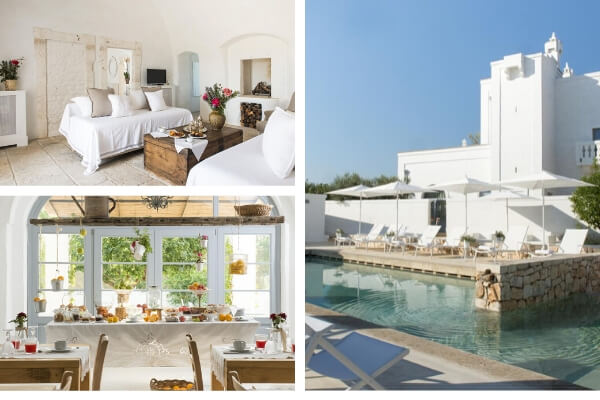 A fortified farmhouse (‘masseria’) of the seventeenth century that shines forth anew after a careful restoration bringing together a thorough attention to detail .Between the pure white of limes and the pure white of stones, you can breathe the air of this land, the scent of laurel, olive and cherry trees, bringing back to mind pleasant childhood memories. 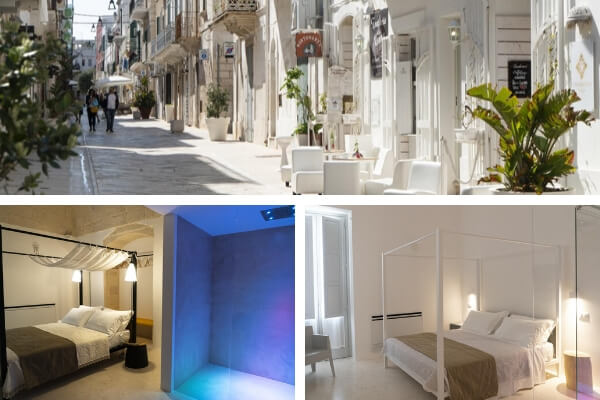