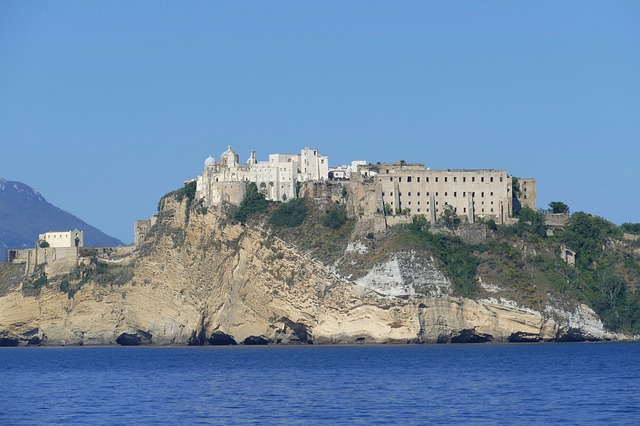 Given its small size and proximity to Ischia, Procida island is an excellent day trip. You can visit the island of Procida by taking one of the many ferries that depart from Ischia Porto, or by booking a private boat with or without skipper.

Once in Procida island, you can start your visit in the harbour area of Marina Grande where your ferry drops you off.

Here you can stroll along admiring the small colourful houses and see the Church of Santa Maria della Pietà, the main church on the island.

You can then wander up the steep streets through the town until you reach the historic fortifies area known as Terra Murata.

Terra Murata is the historic heart of Procida that sits slightly higher than the rest of the island so its ancient inhabitants could watch the horizon and defend themselves from attack.

Here, visit the former Bourbon prison (book a visit via the Comune di Ischia website) and stroll through the historic centre to the San Michele Arcangelo Abbey. From here, take the long staircase down to the Corricella harbour, a tiny fishermen’s village of colourful houses crowded together, the most famous sight on the island of Procida.

This is the best spot to stop for lunch, and there are a number of restaurants with tables directly on the pier. You may recognize the village as the setting of the famous film starring the Italian actor and comic Massimo Troisi, “Il Postino” (The Postman). 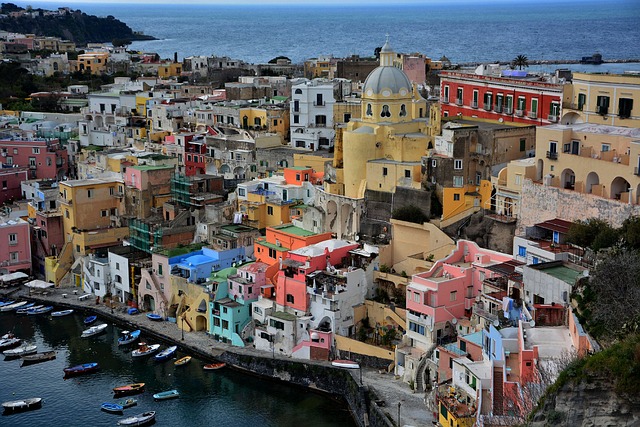 If you would like to take day relaxing dip in the Mediterranean, head to Marina DI Chiaiolella, where there are rental boats and water taxis that can take you to the beach featured in “Il Postino”, or on a sail past the Vivara nature preserve.

Afterwards, before heading back to Ischia, we also highly recommend to book a boat excursion around the island. You can rent a boat, with or without a skipper, from any of the three harbours on the island: Marina Grande, Marina della Corricella, and Marina di Chiaiolella. You’ll spend about 25€ for a 2-hour trip with a boat and skipper.

Procida Island – How to get there

Capri, Ischia and Procida enjoy a climate of long, hot summers and mild winters. The tourist season traditionally runs from the Easter holidays for the first weekend of November. The best times to visit the island are from the beginning of April to mid-June, and from the beginning of September to mid-October.

On average, August is the hottest month. To avoid the crowds, you can visit during the cooler months of June or September when there is usually more space at thermal parks and beaches.

Procida Island Hotels – Where to Stay 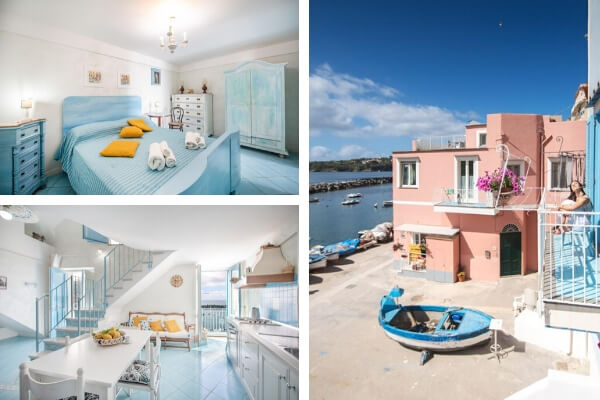 Boasting accommodation with a terrace, Casa Athina is set in Procida. The apartment, set in a building dating from 1900, provides free WiFi. The apartment features 2 bedrooms, a fully equipped kitchen with an oven and a fridge, and 2 bathrooms with a bath and free toiletries. A flat-screen TV is provided.Guests at the apartment can enjoy an Italian breakfast. 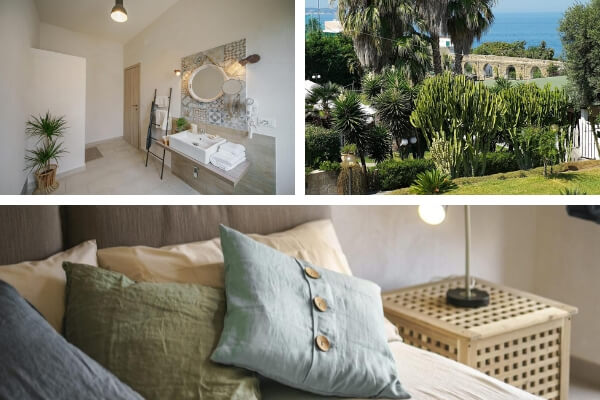 Amazing breakfast in the beautiful garden

Offering garden views, B&b Villa Rosalia in Procida offers accommodation, a bar and a garden. Complimentary WiFi is offered throughout the property and private parking is available on site.Fitted with a terrace, the units offer air conditioning and feature a flat-screen TV and a private bathroom with bidet and a hairdryer. An Italian breakfast is available every morning at the bed and breakfast. 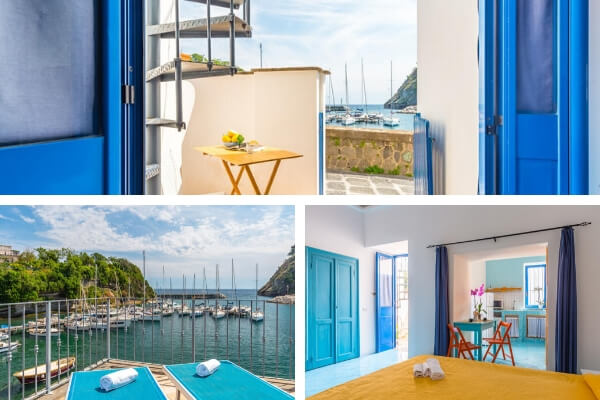 Perfect for a romantic stay

Very suggestive cottage right on the small port of Chiaiolella, perfect for two people. It has all the comforts and the covered terrace is the icing on the cake! Just a few steps away there are bars for breakfast in the morning and restaurant for an evening meal… perfect place to spend a couple of nights relaxing.