Noto (Sicily) is a city in the Province of Syracuse, perched on a plateau overlooking the Asinaro valley, covered with citrus, olive and almond trees. Noto is considered a baroque architectural paradise with one of the most beautiful historic centre in Sicily.

It’s possible to visit the historic town centre in a half day. Everything in Noto, Sicily, is an architectural gem, whether it’s a fountain, an arch, a church, a palace, or even a staircase or a balcony. In 2002 Noto and its church were declared a UNESCO World Heritage Site. Noto was completely destroyed by the earthquake in 1693 and then rebuilt.

The principal tourist activity in Noto (Sicily) is simply a wander around the narrow streets, admiring the golden-coloured stone buildings, the fantastical facades and balconies.

You access Corso Vittorio Emanuele through the Royal Gate. There are some symbols that decorate the door (a tower which is symbol of fortitude and a Cirneco, a dog symbol of faithfulness). These symbols origin from Bourbon monarchy. Next to the Royal Gate there are public gardens filled with bougainvillea, flowers and palm trees.. It’s the perfect place for a relaxing stroll under the sun!

Noto flower festival called “Infiorata di Noto”. It is a festival that attracts thousands of tourists from all over the world. The main street of this event is Via Nicolaci, which is decorated with flower petals to create real mosaics. It takes place on the third Sunday of May. 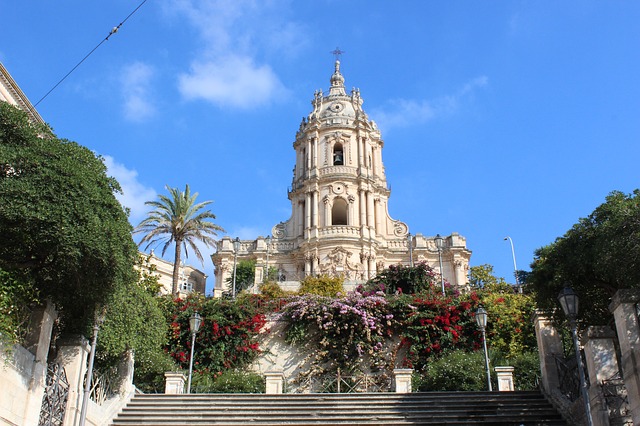 Your next stop (35 km far away from Noto, Sicily) is situated in the dramatic landscape of the Monti Iblei, a range of high ground divided up by deep valleys and it boasts some very fine Baroque architecture, picturesque views and historic lanes. For these reasons Modica is one of the area’s UNESCO-listed Baroque towns.

If you love the baroque style, the stunning churches relating to this architectural style, you must visit Modica. Today the town is composed of two urban agglomerations: the Upper and the Lower Modica, both are fascinating in equal way for different reasons.

The historical centre stretches along Corso Umberto I, living room of the town, in the lower part of the Iblean centre. The network of streets is rich of old buildings and churches where coffee shops, restaurants and little stores.

The Cathedral of Saint George reigns on the promontory of the town. Like most of the area’s great architecture, it was created in the local Baroque style after the 1693 earthquake destroyed the previous building. The twin staircases climbing to the church are attractive with little half-wild gardens swarming with roses, wisteria and palms.

Climbing upwards to the left of the church you can explore a steep maze of village-type dwellings; some ruinous, some well kept, some for sale. At the top is the Belvedere Pizzo, a good viewpoint with benches and views over the Modica valleys. 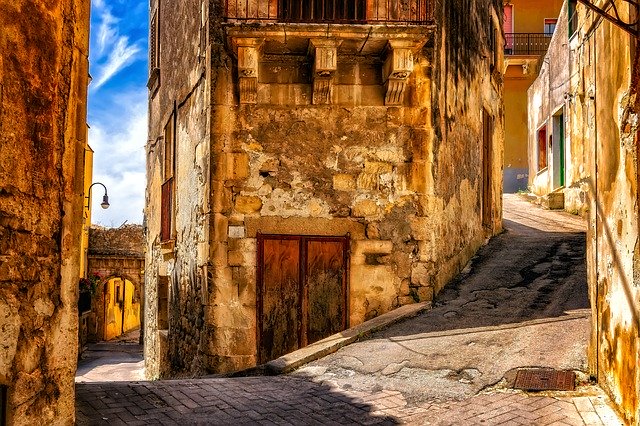 Along the street from here is another imposing church, the nineteenth-century Chiesa di San Giovanni, with another grand staircase and extravagant façade.

Modica is also particularly famous for its chocolate and it is an appealing destination for food-lovers.
Modica chocolate is rich, dark and crumbly, produced in a traditional method imported from the New World by Sicily’s Spanish overlords.

It can be melted, or eaten solid. The traditional flavours are vanilla and cinnamon, but you’ll find all kinds of flavours including chilli pepper and sea salt.

Don’t miss: The most famous chocolate-maker: the Antica Dolceria Bonajuto (Corso Umberto I, 159)

Our tip: Taste all types of the chocolate in the town’s shops, there are free samples available and it is easy to turn a tour of Modica into a gastronomic pilgrimage.

Ragusa is one of the most picturesque towns in Sicily (15 km far away from Modica). Ragusa is a town with two faces: a modern one featured by wide streets and the old smaller one known as “Ibla” in the Baroque style, featured by sparkling narrow streets, stairways and irregular squares.

The two halves are separated by the a deep ravine (Valle dei Ponti). The town’s archaeological museum and its everyday shops and businesses are in Ragusa Superiore. 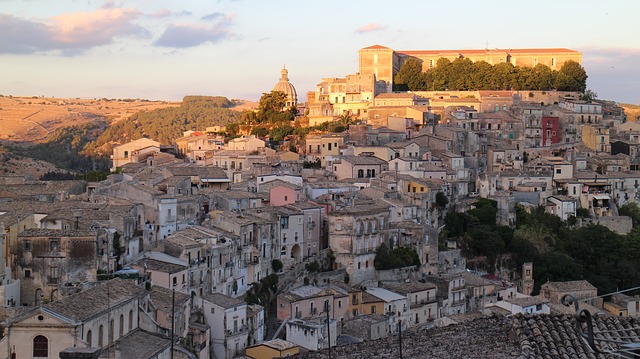 Ibla is the most charming part to visit: there is so much to see in Ragusa Ibla that you could simply wander around and stumble at will upon town mansions, quiet gardens, pleasant squares, good cafés, excellent restaurants and Baroque churches.

There are some sights you absolutely must tick off. The first is the Chiesa del Purgatorio, then the sloping palm-lined Piazza del Duomo, the magnificent three-tiered facade of the Cathedral di San Giorgio and the superb town park Giardino Ibleo at the eastern end of the city, wonderful for an evening stroll or to rest during the heat of the day.

The public garden at the end of the main road “Corso XXV. Aprile” is a green and shady refuge on hot Sicilian summer days. It features high palm trees, Mediterranean plants, the church Chiesa dei Cappucini (church of the Capuchins) with a 17th century wing altar, and stunning views of the valley of the river Irminio and its surrounding canyons. It’s the perfect place for a romantic sunset!

If you’re here for classic Sicilian peace and beauty, then the best places to stay in Ragusa are the historic alleyways. For a great experience, stay at The Locanda Don Serafino, an elegant and atmospheric hotel located in an old small building of ‘800 century fully restored. 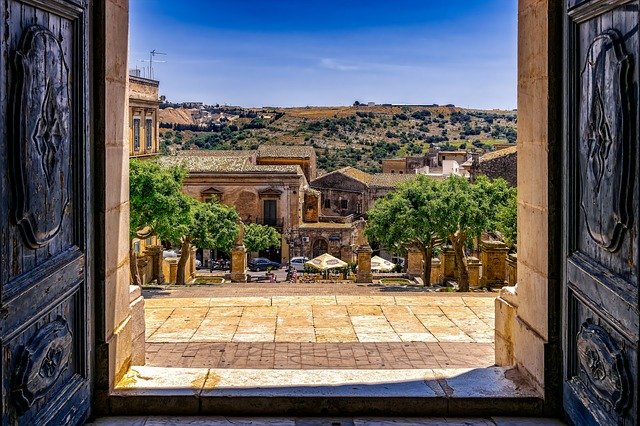 It hosts ten elegant and comfortable rooms, a charming place with only 22 beds for highly demanding guests. The hotel is cut right into the rocks of the town! Unique as its restaurant “Locanda Don Serafino”, one of the best restaurants in Sicily, located at few meters from the hotel.

The Feast of St. George, which takes place in Ragusa Ibla on the last Sunday of May, is a religious event highly felt by the locals. The most awaited moment of this festival is the so-called “Ballad of the Saint”: the bearers of the saint raise it to the sky with outstretched arms, to the call of “All Trounu” to indicate that it is the patron saint of the city.

Ragusa Hotels – Where to Stay 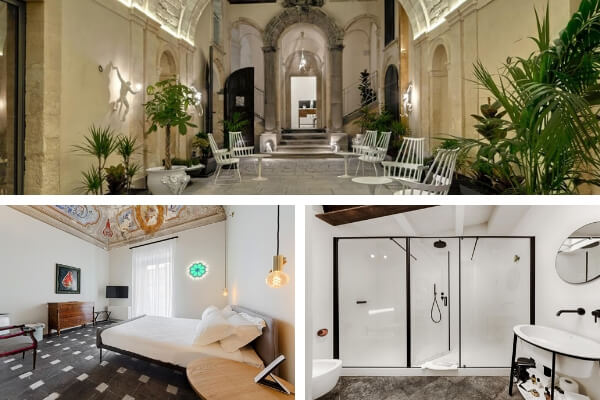 In the heart of one of the iconic cities of Sicilian Baroque – a UNESCO site since 2002 – and overlooking the Piazza Duomo of Ragusa Ibla, is a refined historic residence that redefines the concept of Sicilian hospitality. Boasting 7 rooms and 3 suites, a.d. 1768 offers a modern and exclusive concept of hospitality, allowing you to fashion your own bespoke stay in the heart of Baroque Sicily. 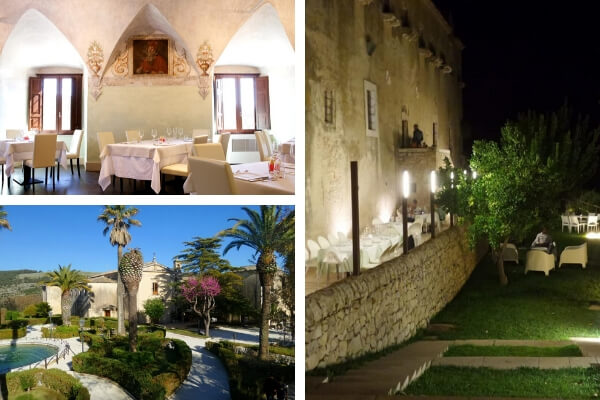 Located in a strategic position, in the heart of Ragusa Ibla, amongst the most beautiful attractive sites of south-eastern Sicily, the Convent, built in 1610, represents a rare remarkable example of the architecture prior to the earthquake occurred in the Val di Noto in 1693.Inside its recently restored premises, which house a Hotel, a renowned Cooking School and a Restaurant, guests can enjoy an exhaustive natural and authentic sensorial experience. 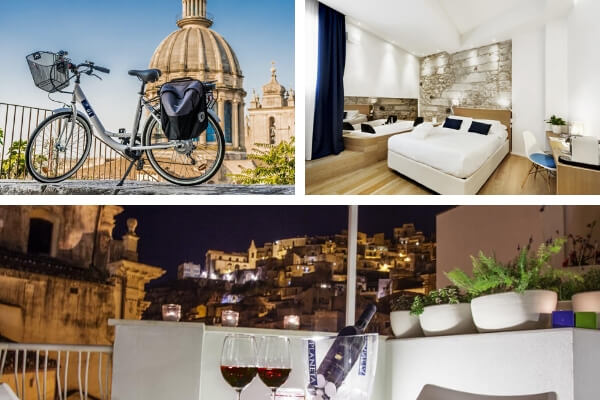