A day trip to the Royal Palace of Caserta: How to plan your visit

If you visit Campania for the first time, an obligatory stop is the Royal Palace of Caserta, conceived as the Italian response to Versailles, a stone’s throw from Naples, it is one of the best legacies left by the Bourbon dynasty on the Campania soil. 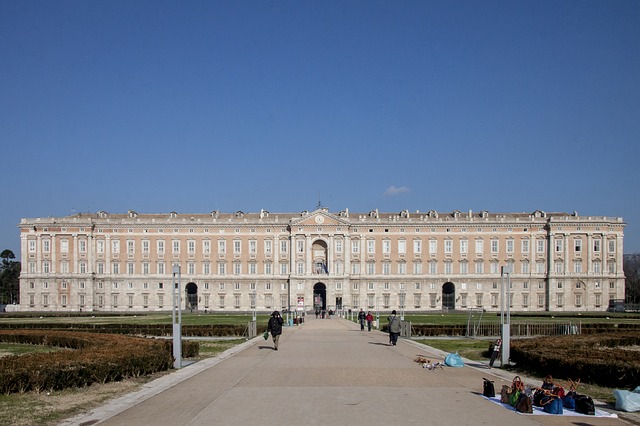 The Royal Palace of Caserta, a masterpiece of architecture by the genius of Luigi and Carlo Vanvitelli, was completed in 1845 and consists of more than 1200 rooms and almost 1800 windows that make this complex the last great work of the Italian baroque, so much so that in 1997 it was included in the UNESCO Heritage List.

The royal family of Naples, the Bourbons, built a palace where luxury, love for the art and beauty combine perfectly, creating a unique jewel of its kind, which can be visited only internally, or only in the Royal Park, and which can be visited (which we recommend, if time permits) both inside and outside of the Palace.

The interiors of the Royal Palace of Caserta are truly impressive. You can visit all the rooms, including the theatre (open only on weekends) and the huge library. Everything inside is very special to see: the Throne Room, for example, is the richest and the most extraordinary environment of the royal apartments.

But,if you thought the palace was large, the park will really impress you with its size. From the rear of the palace building, the park stretches out into the distance: two long and parallel avenues, with spectacular fountains and statues all along, lead to the top of the Great Waterfall, a natural source that feeds the fountains. From the palace to the end of the park is almost three kilometres long!

But once you get to the top, the view is worth the effort. Consider at least a couple of hours walking, the climb up to the top is absolutely feasible, with many shaded areas on either side along the route where you can take a break under the trees. 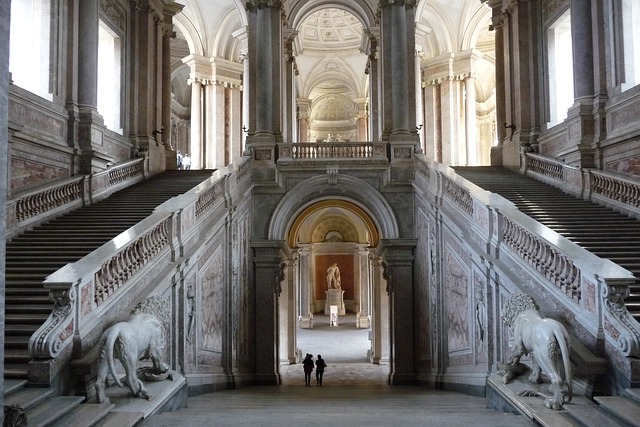 Admission to the Royal Apartments and Caserta Park costs €12 for a regular ticket.
Official guided tours, led by art historians and lasting about 90 minutes, are offered on weekends and holidays in winter and daily in summer (admission 5.80€, reservations required). On weekend nights, June through October, Paths of Light in the Reggia helps visitors discover the palace accompanied by light effects, 18th-century music, short performances, and multimedia presentations. Make reservations well in advance (18€ adults; free for children 5 and under).

Did you know?
The Royal Palace of Caserta is a place of otherworldly beauty, which is most likely why it was chosen as a location for two films from the Star Wars saga, “The Phantom Menace” (1999) and “Attack of the Clones” (2002). The palace’s interior and gardens became the Queen’s Palace on Naboo.

It also has been used as the setting for a number of blockbuster movies, including Mission Impossible III, Angels and Demons, and Spielberg’s The Kidnapping of Edgardo Mortara.

Royal Palace of Caserta Travel Tips: Things to know before you go!

-The Royal Palace of Caserta draws a huge number of visitors, especially during weekends and public holidays. It is a good idea to buy skip the line tickets online to save time and avoid hassle.

-If you come during the summer months instead, the smartest travel plan would be to arrive at the opening time, that’s to say around 8:30 a.m., start the visit from the gardens (perhaps the best time of the day, not too hot) and then go on visiting the apartments in the hottest hours. The Royal Palace of Caserta is immense, so it takes at least half a day to see it all.

-Don’t forget to wear comfortable clothes and sneakers, bring a bottle of water with you, especially during the summer months

-For a coffee break you can stop at the food courts located at the beginning and the end of the Royal Palace: you will find one inside the building, just before entering the park, and one another near the English Garden. 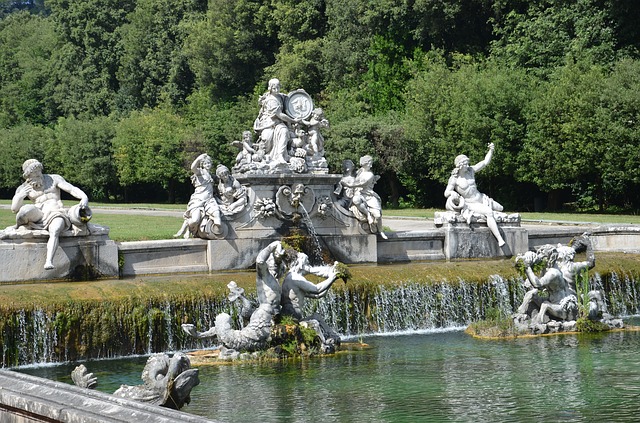 -Finish your visit by climbing the set of stairs to the artificial cave called “the Dungeon” on top of the waterfall and get a view of the entire gardens, palace, and beyond. This view, with Mount Vesuvius and the island of Capri in the background, is really stunning!

It is a good idea to take the paid shuttle to the English Garden as the long and straight walk can get very tiring. You can also You can also rent a bike or opt for a horse-drawn carriage ride.

-After your visit you can shop at one of Naples’ swankest retail centres: the La Reggia Designer Outlet that’s home to more than 100 shops, as well as some great places to enjoy a relaxing, upscale lunch.

-For a quick pizza before or after your visit to the Royal Palace, try Pizzeria I Masanielli, famous for its “pizza a canotto”, given the high, soft crust that forms a canoe-shaped pie.

-To get to Caserta you need to take a train from ‘Napoli Centrale’ station in Naples, from where there are multiple trains to Caserta. It takes about 45 mins by train from Naples to Caserta. The Royal Palace of Caserta is just across the street and hardly takes 5 mins to walk.

The best time to visit Naples, Pompei and Caserta

Thanks to its location in Southern Italy on the Mediterranean, Naples and Caserta are warm year-round. However, shoulder seasons are the best time to visit Naples/Caserta. This is from March to May and then from September to November. You’ll avoid peak tourism season when you come during the shoulder seasons, and you’ll still have nice weather.

Temperatures average around 21°C for most of the shoulder season. The summer months (from June to August) are scorching, with temperatures often being around 35°C. December to February are the coldest months, with a high of 13°C.

If you want to visit Pompei or Herculaneum, shoulder seasons are the best time. There will be fewer crowds, and you will be a lot more comfortable exploring the ruins in cooler temperatures than in the searing heat of summer. There isn’t much shade at these sites and very few places to sit and take breaks.

Caserta Hotels – Where to Stay 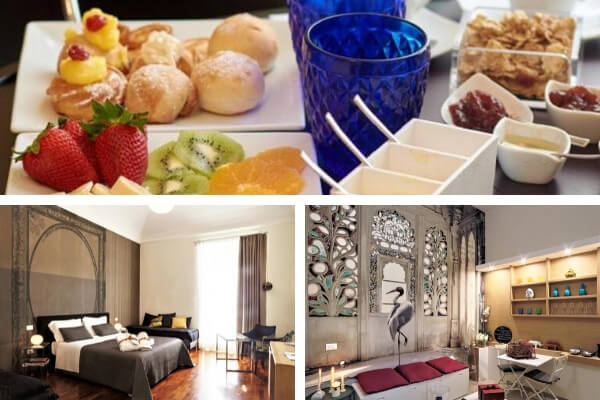 Offering free WiFi, Artistic Charming House offers accommodation in Caserta, 100 m from Royal Palace of Caserta.Six rooms of various types, complete with courtesy line, hairdryer, TV, minibar, safe, soft linen, are characterized by artistic wallpaper, which give each one its own identity. A Continental breakfast is served daily in the comfort of your room and includes local products. 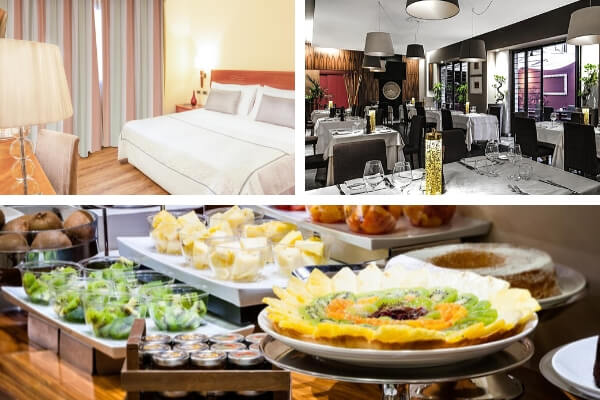 Situated in the heart of Caserta, Hotel dei Cavalieri overlooks the green Piazza Luigi Vanvitelli. It is less than 300 m from the Royal Gardens of the Royal Palace, a UNESCO World Heritage Site. Breakfast is a generous buffet with specialities from Campania. Free oft drinks and snacks are offered throughout the day. Later in the day, you can sample typical Mediterranean cuisine at the on-site restaurant, 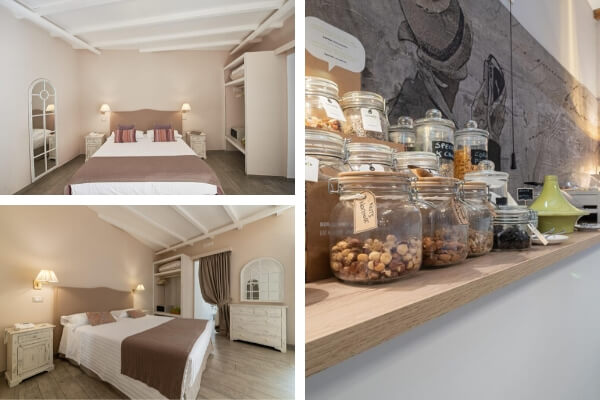 Featuring free WiFi and a terrace, Cas’E Charming House offers pet-friendly accommodation in Caserta, 200 m from Royal Palace of Caserta. Guests can enjoy the on-site snack bar. An American-style breakfast is served daily including organic products, as well as vegan and vegetarian options.